Yunyun (pronounced "YUWN-YUWN" or "YOON-YOON") is a CPU Mii from Wii Sports Club and Wii Party U. Her Total Skill Level is 11, tied with every other Beginner Baseball teammate.

She only competes as a Baseball teammate and appears as Coach in Boxing and Spectator in Tennis.

In Wii Party U, Yunyun is in Beginner Difficulty.

(Her Japanese name is similar to her English name, but with an apostrophe between the N and the Y.) 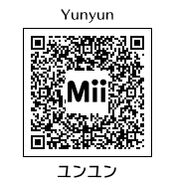 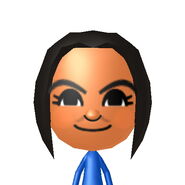 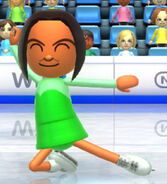 Yunyun as a swimming referee.

Yunyun with Maximilian in Miitopia.

Yunyun in a StreetPass picture showing off the various emotions that the game has, representing the excited emotion.
Community content is available under CC-BY-SA unless otherwise noted.
Advertisement