Xixi (pronounced "SHEE-shee") is a CPU Mii from Wii Sports Club and Wii Party U. Her

In both Tennis and Baseball, she is a beginner Pro at Grade ★3.

In Boxing, she is a tad bit below average at Grade 4.

In Wii Party U, Xixi is in Expert Difficulty. 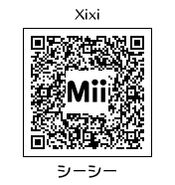 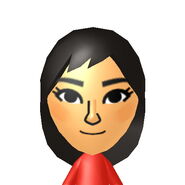 Xixi and friends in My Nintendo.

Xixi with Mizuho and Skip.

Xixi as a swimming referee.

Xixi with Marie as Diana. 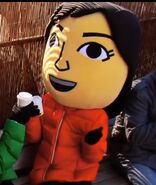 A person in a Xixi costume in "A Very Special Day in Canada For The Miis".

StreetPass artwork of Xixi giving a puzzle piece to Pavel.

Ricardo "accidentally" splashing Xixi and an unnamed Mii with snow in "The Miis take a snow day at Whistler Blackcomb".

The Balldozer (Xixi 4th, Marie 3rd.)
Add a photo to this gallery
Retrieved from "https://wiisports.fandom.com/wiki/Xixi?oldid=226077"
Community content is available under CC-BY-SA unless otherwise noted.