Not to be confused with Wii Sports Resort, Wii Sports Club or Nintendo Switch Sports.

Wii Sports (Wii スポーツ Wii Supōtsu) is a sports video game developed and produced by Nintendo as a launch title for the Wii video game console, and part of the Touch! Generations brand. It is the first entry in the Sports series. It was first released in the U.S.A. along with the Wii on November 19, 2006, and was released in Japan, Australia, and Europe the following month. The game is included as a pack-in game with the Wii console in all territories except Japan, making it the first game included with the launch of a Nintendo system since Mario's Tennis for the Virtual Boy in 1995.

Wii Sports is the fourth highest sold video game of all time. 82 million copies of the game have been sold worldwide. It is Nintendo's highest sold game. Wii Sports has been featured on television in Wii commercials, news reports, and other programmings.

A special limited-edition bundle was also released in Europe in November 2009 featuring both Wii Sports and Wii Sports Resort on the same disc packaged with a black Wii console and a Wii MotionPlus. The game was followed by a sequel, Wii Sports Resort, in 2009 and a remake, Wii Sports Club in 2013.

Wii Sports is a collection of five sports simulations, designed to demonstrate the motion-sensing capabilities of the Wii Remote to new players. The five sports included are Tennis, Baseball, Bowling, Golf, and Boxing. Players use the Wii Remote to mimic actions performed in real-life sports, such as swinging a Tennis racket. Players also get to play as their Mii for the first time; if they played this game first. The rules for each game are simplified to make them more accessible to new players.

The game also features a training mode which include mini games based on the Tennis, Boxing, Bowling, Golf, and Baseball sports and a fitness mode that monitor players' progress in the sports, by determining the players "Wii Fitness Age" on a scale of age 20 to age 80.

The game introduced 60 starting CPU Miis, who appear as opponents in Tennis, Baseball, and Boxing if a human player is playing by them self. Each CPU has their own preset skill level. If a CPU is beaten, the player will move on to a CPU of higher skill if they play again. This was the first time that CPU Miis appear in a Wii game.

Wii Sports received generally positive reviews according to Metacritic with a score of 76, four lower than it's sequel Wii Sports Resort. The highest score of 90 was given by Official Nintendo Magazine System UK, N-Europe and Nintendojo while the lowest was given by Digital Entertainment News, with a score of 50. IGN enjoyed the simple, pick-up and play style of the game, but criticised the low graphic quality and lack of depth giving it a 7.5. GameSpot liked the additional training features to the game and the basic pick-up and play features, but still felt it lacked in graphic quality and depth giving it a 7.6. GameTrailers commented that the game provided a lot of depth for long time gamers while still being accessible for new gamers. They criticised the lack of a tournament mode and said that the game was not worth paying for and was only worth it if the game came bundled with the system with an 8/10. The Game ended up winning several awards both at E3 and after release. Time said the game was the best of 2006 and IGN gave it the best sport game and 2nd best game of 2006. 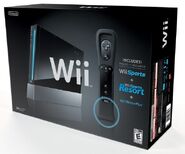 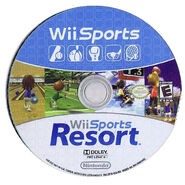 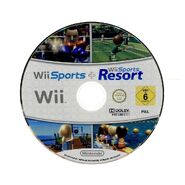 Helen and Steph are about to play Tennis.

Ashley is about to play Baseball.

Kentaro is about to play Baseball.

A Boxing game against Elisa.

Another picture of a Boxing Training Game. 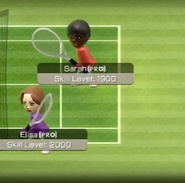 Sarah and the Champion Elisa are about to play Tennis. 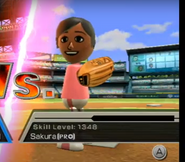 The Champion Sakura is about to play Baseball. 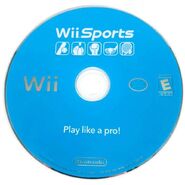 Miis that debuted in Wii Sports