Not to be confused with Wii Fitness from Wii Sports, or Wii Fit U or Wii Fit Plus.

Wii Fit is a combination of fitness, simplicity and fun. Designed for everyone, young and old. By playing Wii Fit a little every day, you, your friends, and your family can work towards personal goals of better health and fitness, and know more about body parts, or if you want to have fun, you can do so by playing with friends/colleagues.

There are two main modes in Wii Fit. There is the Body Test and Training. In the body test, Wii Fit will measure your center of balance, and body mass index (BMI), then will give you two balance tests before determining your Wii Fit Age. In training mode, you can select one of 48 activities including yoga, strength training, aerobics, and balance games. In aerobics, we see the Mii Ray, who can talk.

The sequel - expansion of Wii Fit, Wii Fit Plus, released in October 2009, features new activities and workouts and more.

There is a total of 48 activities in Wii Fit divided into 4 categories: Yoga - Strength - Aerobics and Balance exercises. Some of these activities have different modes, such as a 2-Player version of running and more. 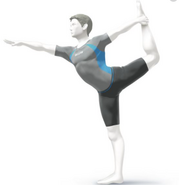 Hula Hoop, an example of a Wii Fit game. 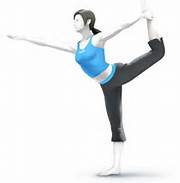