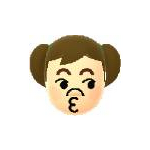 Hi! My name is Unknown Channel. I'm Interested in Wii Series and sometimes like to make up stories about CPU Miis!

Unfortunately, I can't play those games 'cause I don't have a Wii or a Wii U (or any Nintendo consoles, except for GBA SP, but that's really old and now it's broken). Now, if only I have those... (I mostly have PlayStation consoles.)

What Am I Doing Here?

Can be done at any time

Finally, on October 12, 2019, I've finally gotten the platinum badge on this Wiki!

I don't know why, but I feel like there's something elegant and gorgeous about this hairstyle, especially when I see it from the side view! Also, Miis with this hairstyle tend to have attractive and interesting faces!

Tomoko and Rachel don't count, look at my hate list for the reasons.

However, my all-time favorite Mii is this one:

Because she's the champion of tennis, a high-leveled pro in boxing (Imagine if she could beat Pit in that sport, she could be a double champion) and a Master Mii. Also, if she's on Enrique's team, that means she has a champion's skill in baseball. Not only that, she's also beautiful and has a slim body as well!

I also imagined her as a rock singer once.

P.S: Now Joost and Maria (WSC) are also included on my all-time favorites!

Now I was wondering if Nintendo could release plush toys based on CPU Miis...

Miis That I Hate

Most of them because they have ugly facial features.

Julie, Shouta, Naomi and Hiroshi: They have giant lips, which is disgusting and ugly in my opinion!

Tomoko and Rachel: As stated before, they have beautiful hairstyle, but their faces turn me off! And for Tomoko, she has those giant lips... just like Julie.

Helen and Chika: They look boring to me...

Sandra: It looks like she plucked her eyebrows too much...

Jake: Similar to Sandra, but more extreme: He shaved his eyebrows off!

Pablo: His eyes look like they've been stretched out too far from his face... (I'd prefer Pedro instead of him!)

Eva: Her face reminds me of Disney Villains...

How about the rest of the Miis?

Miis that are not on both lists are average.

Retrieved from "https://wiisports.fandom.com/wiki/User:Unknown_Channel?oldid=199706"
Community content is available under CC-BY-SA unless otherwise noted.