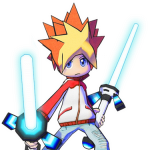 My stats in Wii Sports

High Scores and Medals in Training

My stats in Wii Sports Resort

100th: Takumi (Cheater in stage 19 and pretty annoying in Baseball)

99th: Asami (She treated me like crap in Board Game Island)

94th: Fritz (He does not look promising at all)

93rd: Michael (It's his name, his name reminds me of awful YouTubers called Michael like Michael the Vyond Guy)

Coincidence? I think not!

OMG! Ai is watching herself go up against me!

Thanks a lot Asami for ruining my 70-Hit Combo!
Add a photo to this gallery

Q:Since you don't play WSC, who are your favourite and least favourite Miis?

A:My favourites in WSC are Rie and Barbara. Rie just looks cute you cannot deny that, and Barbara is basically next level Rachel because they both like pink, they are pros at Boxing and they both look so beautiful. I also like Barbara for being the champion in Tennis along with her sister Alice. As for my least favourites, they would be Pit and Zi-Kai. Pit is next level Matt and I hope Pit doesn't become a meme. They are both boxing champions though, which are their redeeming qualities, but Pit, his boxing glove design when you go up against him is scary and he is pathetic in the two other sports. Zi-Kai is also my least favourite because of Kiddo and Mr. Mario 28. Kiddo made a sockpuppet called Kiddo Zi-Kai Skip BFFs and I remember Kiddo vandalised Zi-Kai's page by putting a story of him, Kiddo, Dunbar and Skip sexually torturing Rachel. As for the other user, Mr. Mario 28, he has Zi-Kai as his PFP and says he is his favourite. I know this will be a bad reason to hate Zi-Kai because of Mr. Mario 28, but Mr. Mario 28 was an admin who abused his power and made sockpuppets like one called Mr. Toad45.

Q:Why do you hate Matt because of his memes?

A:Those gosh awful memes. Matt gets at least one meme every day and people won't stop, it's annoying. They also claim he's Ultra Instinct, like Shaggy. Only Goku can have the Ultra Instimct powers. Matt is just a weakling and a normal CPU Mii, he's only a pro in the sports he's a champion in (i.e. Boxing and Swordplay) but I'm sick of those Ultra Instinct memes and I wish they would all die by now.

Q:Why do you find Hiromasa scary?

A:His terrifying face. His face looks like a villain from an R rated movie or an M rated game. That sinister grin of his, that's what makes him scarier. The eyes and the eyebrows add more levels of scariness and his glasses are red, which is the colour of blood, meaning he will or might be bloodthirsty. So that look on his face will scar you for life when you see it first time if he stares at you or looks directly at the screen. I wonder if there will be a creepypasta of him.

Q:Do you ship any CPU Miis?

A:Actually, yes I do. Here's a list of my shippings I can come up with.

Q:Why do you hate Jessie because of Baseball?

A:She would always try to ruin my road to getting past Elisa and her teammates and past the teams Jessie plays on.

Q:Why do you find Lucía unfair?

A:Table Tennis, she never let me get a point at all when I first went up against her. This unfair Table Tennis player plays with the Mii HowILoveIt loathes in Basketball. (i.e. Fritz)

Q:Why do you not like Michael simply because of his name?

A:Whenever I see the name Michael, I'm reminded of a few bad YouTubers that have Michael in their username and/or as their real name. The main one of them though is Michael the Vyond Guy, a cringey Vyond user notorious for some of his Vyond styled rants like his Eeveelutions rant. Although I like some YouTubers called Michael, like Michael Huang from jacknjellify, Michael Johnson from Vidiots and Michael Stevens from Vsauce, nuff said.

Q:Why do you love Sakura? (Besides her being the Baseball champion!)

A:Well, besides her being the Baseball champion, she plays with my other 2 favourites (Rin and Rachel) in Basketball and Tennis respectively. I also love her for being the Anti-Pro Champion in Tennis along with Ashley and for being a Master Mii and a Pro at Cycling. I would love to see her appear in Black Armour.

Q:Do you like any Miis Poofesure hates and do you hate Poofesure himself?

A:For the former, I like Abby, Elisa and Theo, and as for the latter, yes, because he screams a lot, he brainwashed his fans to hate Elisa and he was perverted towards Abby in Baseball.

Q:Why do you hate Takumi?

A:Stage 19, do I even have to explain? Not to mention, 19 is one of my two unlucky numbers, the other is 12. Takumi is a cheater in that stage, he almost never lets you attack him and he swings at the speed of light. HowILoveIt hates him because he said he looks like a manipulative millionaire, well, if that's the case, you stay away from any female Mii I love, you cheater! You're below Lucía in my tier list!

My status on the wiki

Retrieved from "https://wiisports.fandom.com/wiki/User:TheShinyLucarioMaster?oldid=202585"
Community content is available under CC-BY-SA unless otherwise noted.