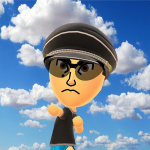 Mii's that catch my eyes (for good OR bad) due to unique looks:

Takashi: I like to call him "Fish-face" (not out of malice)

Gabriele: After Unknown Channel compared him to an "alien(ugly face!)" I started affectionately (NOT ROMANTICALLY, affection is just a positive feeling for any type of growing relationship, friend or lover etc., the former in this case) calling him "The Martian". I like to see him as having a muscular build, but the way the muscles are shaped make his body look... alien.

Bowen: Looks like a mix between an elderly gang boss and an 80s groovy disco man, more of the latter.

Rainer: Cool pompadour and he reminds me of a shark.

Siobhán: Swirly-Girl (she's eccentric and aloof; not a reference to the American toilet prank), you come up with the inventions!

Hyun-woo: If I stated what I think he looks like, I could offend many...

P.S. To see the original image of my Mii, which has another version made with different instructions, go here.

Let me tell you, I have few to no interest in sports where you don't encounter CPU Miis in significant role (Island Flyover does have Miguel, which sort of subtracts that from this list and frisbee has a good dog). (FROM AN EDIT ON OCTOBER 6TH 2019: Hmm... from sheer observation of the possible excitement, I declare that I like Archery, Bowling and Power Cruising more.) So Golf, Canoeing & Wakeboarding have varying degrees of my minimal appreciation. I'll make an exception for dogfighting, seems to be a tad more intriguing. The main reason I like these types of sports less are because it just feels so lonely in a bright and pretty much utopian place, which wouldn't mix in this situation. I'm not asking for it to be fixed, I just... don't like it.

Abby and Rie would be considered pretty by normal people but I find them endearing...

In my dictionary...Cuteness DOES NOT ALWAYS EQUAL Favourite...

Least to Most favourite Miis.

Here's my least to most favourite Miis. I'M TRYING TO BE LESS BASED ON LOOKS (edit: 23/11/2019. With my ranking finished, I will admit my true intentions; those were to balance looks with other factors i.e. don't judge a person just by their face. Credit to HowILoveIt for his comments that changed my mind).  I haven't played Wii Sports and I forever will be unable to because those systems are no longer in my reach/in production, so my judgement is limited. It definitely could change if I had access to a Wii. All this is from observation.

If you have any questions on my rankings, be it for my hypocrisy, asking for explanation, clarification, expansion etc. put it on the message wall I titled "Wii Sports Resort Mii Ranking Queries". I will do my best to answer it.

I don't hate any miis, the lowest belt is "dislike" of TheShinyLucarioMaster's tier list. Credit to him. Credit to all the users and all the sources who influenced my views. Credit to Nintendo. :D.

If I ever make a ranking for WSC Miis, it will prolly be on a blog post so this page doesn't lag too much.

Retrieved from "https://wiisports.fandom.com/wiki/User:MarquessMark?oldid=193442"
Community content is available under CC-BY-SA unless otherwise noted.