The following accounts are operated by the same person:

I love the Wii Sports series!

I may not be as active on this wiki, the wiki seems like it's pretty professional.

Check out Everything Science Wiki! It is a wiki devoted to Science, but also history and other subjects. If we can get more decent people to add topics, that would be greatly appreciated!

https://wuhu-island-history.fandom.com/wiki/Wuhu_Island_History_Wiki. This is the place for all the Wuhu Island fanon and memes, not Wii Sports Wiki.

https://poofesure.fandom.com/wiki/Poofesure_Wiki. If you want to add Poofesure memes to the Mii pages, go there, not here.

Baseball: 1328, Pro Class, current opponent- random. Mercy ruled the champion Judson (I was playing a mod when I beat the champion) so I'll never have to face Sakura.

Boxing: 3124, Pro/Super Star Pro Class, current opponent- random. Defeated Matt twice and unlocked the Silver Gloves. (My mom used to not let me play Boxing until I was 18 because she said it was too violent. Hmm, really?)

Note: my save data couldn't transfer to the Wii U. So I had to start all over. I also am using a different Mii, called Kate.

Island Flyover: Collected all 80 iPoints, earned 4 stamps (I only have 2 balloons left!!)

My Opinions On the Miis

Note: not all the Miis in Wii Sports/Wii Sports Resort are listed here, because I do not have opinions on them, or I don't have time to add their opinions.

Miguel- Easy as heck in Basketball. Even when I fail to swap the ball away from him, I still can manage to get up in time. Really not very memorable though.

Anna- Why does she look so angry?

Megan- One of my friends said she looks like a chicken nugget.

Nick- I faced him in Baseball recently and tied 0-0. I gained 15 skill points. He is a very hard opponent, but I managed to tie against him. He looks like an otter.

Kentaro- Now that I looked up who Big Smoke was, he actually kind of does look like Big Smoke, but without the hat. (Thanks Minefa5). He also kinda reminds me of my Mii of Carl Wheezer.

Eddy- Spaghetti. Yes, Poofesure. Honestly, there's nothing notable about him.

Elisa- ELISA!!!! GO AWAY!!!! I HATE YOU!!!! WHY IS IT ALWAYS ELISA!?! Just kidding, I don't hate Elisa. She's actually pretty easy to defeat in Wii Sports, even in Tennis. It's just that, the hard part is getting a perfect game in Tennis with her and Sarah to ensure I gain skill points

Jackie- Looks like a bear, nickname: "Honey Bear". Dislike her a bit because when I was facing Rin's team, I was tied 5-5, with two outs, in the third inning. She hit a homer and I had to restart. JACKIE!?!!? WHY!??!? Although, I finally beat Emily in Baseball and no longer have to see her (Jackie) when I play as Kate or Bob.

Emily- Very annoying in Baseball. Although I finally beat her. Twice.

Julie- Those lips are way too big! She also looks ugly!

Miyu- Looks like Midori. Even though there is one user that says that Miyu and Midori look nothing alike, I still think they do. However, I can tell them apart, because of their skin color, facial features, etc. I think that because the hairstyle and head shapes are the same, that's why they look so similar. I imagine her to be Matt's girlfriend, with a high-pitched squeaky voice and totally devoted to Matt (not because of the memes, though).

Fumiko- Check out her YouTube channel! Aside from that, she's not very memorable.

Mike- A cool dude, I guess? Nothing really memorable about him.

Holly- Honestly, I find her ugly.

Chika- Spanish for "girl" (even though it's spelled differently). Why is she so sad?

Matt- I didn't even know he was a meme until a few months ago. I don't believe he is God, that Shaggy/Thanos/Big Chungus can defeat him, or whatever. To me, Matt is just a normal guy who is the champion of two sports (which are Boxing and Swordplay). If you don't like Matt, go here. This might cheer you up. Also, check out Matt's YouTube channel! (Yes, Matt, I see you on Discord...).. He is also in my Tomodachi Life.

Fritz- Looks like a monkey. Also, has a Basketball team of champions (Lucía and Matt). He also reminds me of my uncle (who is NOT a monkey)

Lucía- She's OK, except in Table Tennis. In Table Tennis, I HATE HER!!!! For a solid half hour, I tried to defeat her, but I couldn't! She kept out-hitting me, and my paddle would randomly orient itself (which I call pulling a classic beef boss) so that she would score points. A level 2500 Mii is easier to defeat than her!!!

Asami- Hard to tell she's a girl. Also, a goldfish.

Hiroshi- The lips are way too big! And on My Miis Wiki, Hiroshi is the champion of Tennis. His partner is Jippy.

Sandra- The eyes are way too small!

Tomoko- Her eyes and lips make her look weird.

Greg- Seems to me like he'd be a ladies' man.

Sakura- Have never faced her in Baseball yet. Although I have faced Nick.

Rin- Too smiley. Nickname: "Rinny Rin Rin". Also my archnemesis in Baseball. She's hard, but I finally beat Emily, her teammate, so I don't have to worry about her anymore. We now stan Rin on the My Miis Wiki Discord.

Tatsuaki- He looks so angry!

Rainer- Too long of a head. Very smiley.

Hiromasa- Cringe. Cringe. Cringe. In third grade, I blabbed on about him to my teachers and eventually I drew a picture of him. One thing wrong: I thought it was "Hiroshima" (accent on the "ro"). He became a big "thing", and the teachers said, "Be happy like Hiroshima". At the end of the year, one of my classmates said that he was "hiroshima". I cringe every time I think of this months-long incident.

Ai- artificial intelligence. An alternate version of her is one of Misy's teammates in Basketball.

Rachel- I think she looks nice.

Michael- Nickname: "Faint Boy". In Basketball, my siblings and I witnessed him faint once as someone was making a slam dunk. As you know, the Miis usually do that, but my siblings and I didn't know that at the time. Also, Mike is a nickname for Michael, but they are two separate people. Why, Nintendo, why?

Saburo- Subaru. Before I knew his true nationality, I saw him as Mexican. Now I know Saburo is Japanese.

Sarah- She's actually pretty easy to defeat in Tennis. It's just that, the hard part is getting a perfect game in Tennis with her and Elisa to ensure I gain skill points.

Shouta- Seems to me like he shouts a lot. "Shout-a"? Also, very annoying in Boxing. He keeps on punching me hard!

Sota- Reminds me of soda. Kind of obvious here (the names sound similar). He also kind of reminds me of Shouta.

Ren- Has a name similar to Rin. Rin and Ren's favorite colors are both light blue, and they both have black hair. Rin and Ren... they go well together, like a couple. Also, Ren reminds me of Harry Potter.

Helen- It kind of looks like she has a beard. Upon closer inspection, I found out she does not.

Stéphanie- First Mii to have a Basketball team of Pros. Also, Steph is a nickname for Stéphanie (minus the accent), but they are two separate people. Why, Nintendo, why? AGAIN?!?

Gabriele- Man with a girl's name. Gabi is a nickname for Gabriele, but the Miis are of different genders.

Barbara- Has a male hairstyle. Unknown Channel is right- the other Barbara (WSC) is more feminine.

Ian- Nickname: "Mr. Bup" because he is the first Mii to use a hotel slipper in Table Tennis, and the hotel slipper makes a "bup" noise.

Oscar- My friend who said that Megan looked like a chicken nugget said that Oscar looks like a beef nugget, even though I think Oscar is not beefy at all. He looks like a nerdy version of Steve.

Nelly- My siblings call her "Hairy Muscle Man". An alternate version of her is one of Misy's teammates in Basketball. In my personal opinion, Nelly is about 50 years old.

Yoshi- Reminds me (and not only me, probably) of the Mario character.

Theo- That big forehead and the dull expression on his face doesn't make him look all that smart. He seems to be going like "Duhhhhh...". Yes, I agree with Poofesure, he has a fivehead.

Abby- She's a decent looking Mii. Poofesure has not influenced my opinion of her at all.

Pierre- Now he reminds me of Kung Pierre. This is probably why the sockpuppet alert has Pierre's head on it. That guy needs to wash his socks.

Abe- Kind of obnoxious in Basketball

James- OP in some sports

Tyrone- OP in pretty much every sport

Tommy- Looks like a monkey. Fairly easy to defeat in Basketball.

Barbara- The only "clone" Mii that is memorable. She's the champion in Wii Sports Club Tennis and Poofesure wants her to be his girlfriend in his Tomodachi Life.

Akira, Anna, Chris, Daisuke, David, Eduardo, Hiromi, Kentaro, Maria, Matt- They are clone Miis. (I'm not including Barbara and Victor because Barbara is mentioned above and Victor doesn't have an accent in his name, like WS Víctor does). It's like Nintendo couldn't come up with creative names for them, they just had to use names from the original Wii Sports series! Like, c'mon! The Wii Sports Miis are iconic, the Wii Sports Club Miis are not (or less so).

Marius- He looks like Hitler. Minus the glasses. I don't think Nintendo would have done this on purpose, though why would they do this...? (Yes, I am aware that Hitler was a very bad man, and should not be joked about.)

Polly- Even though she's a ★1 Mii in Boxing, she was nice to fight against, the first time around. Second time? Not so much.

Haruka- She kept catching my balls in Baseball! ALL THE TIME!!! I don't really care for her.

How hard are the champions in WS and WSR?

Nowadays, I watch either SuperMarioLogan or SMG4. Even though they are not Wii Sports YouTubers...

A drawing of Theo. A drawing of Elisa. 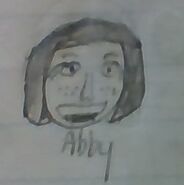 A drawing of Abby.

A drawing of Rainer. 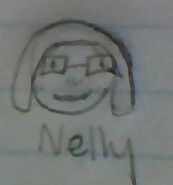 A drawing of Nelly. 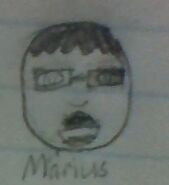 A drawing of Marius.
Community content is available under CC-BY-SA unless otherwise noted.