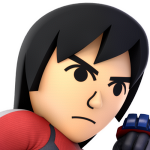 Hi! I try to add information regarding the Wii Sports and Wii Sports Club Miis, featured outside of their home games (i.e. in Smash Bros., Miitopia, Streetpass Mii Plaza among other things) for extra content and information about them.

Similarly, I have been able to datamine the Miis from Resort and Club to get 100% accurate variations of them. For more information/questions regarding this, please feel free to send me a message!

I like all the CPU Miis, but if I had to pick a specific favorite, it'd probably be Mitsu. There's something pretty sweet and wholesome about an elderly person participating in sports for fun. Mizuho's also another one I really like.

Regarding Wii Sports Resort, data on Miis can be extracted from the static folder's common file. All 100 Miis can be found in the game, with data on them that may not even be seen in-game. All of these Miis have blanked out console and Mii IDs, which means they need to be given proper values in order to be usable in the Mii Channel. They also have 2 bytes of data after their Mii info that needs to be removed before even being readable in online Mii editors.

None of the Miis have birthdate or creator data attributed to them. As such, they have no "canon" birthdays.

In order, Miis go by Japanese ethnicity first, and then international Miis. Gender is also ordered too. For example, Japanese Miis get ordered by 10 males (starting with Saburo) before going onto the 10 females (starting with Haru). After the Japanese Miis come the international Miis. These Miis do not have an explicit race or country of origin valued to them, however, and is left ambiguous. Matt, for example, is in the same group as Chris.

The Miis introduced in the original Wii Sports all have the default height and weight values set (64 / 64). They have Japanese names attributed to them, with most of these names being identical to their final, in-game ones. However, there are some exceptions to this rule.

The Wii Sports Resort newcomers, on the other hand, are a bit stranger. All of the Miis have their ID numbers as their nicknames instead of their proper names. The exceptions to this rule are

These height and weight values might be to show that these 5 are younger than the rest of the cast. Curiously, Shohei is the only male to have a custom height.

Wii Music is much less notable compared to Wii Sports. All 60 CPU Miis from the original Wii Sports exist internally, this time with ID information. The promotional Miis also exist, separate from the Wii Sports cast, listed as "E3_guest_[x]". Unlike the Wii Sports Miis, these Miis all have their English names listed instead of their Japanese ones. All of these Miis use the default 64 / 64 height and weight value, with the exception of Marsha, who uses the values 69 / 45.

More will be added soon!!

Something of note with Miitopia's Miis is that everyone is sorted by country of origin. Like how Resort lists Japanese Miis first, Miitopia lists the Korean Miis first (starting with Ji-hoon) and ends with Russian Miis (ending with Olga).

The Miis from Miitopia, unlike Wii Sports Resort, almost all have custom height and weight values attributed to them. Only a select few still use the default 64 / 64 values, like Yuriko. These values are all consistent with the values they use in other games where height and weight is visible, like Mario Kart 8 and Smash Bros. (where Miis of custom weight classes and sizes, respectively, are seen in promotional material).

However, the Miis still do not have custom birthdates attributed to them.

Retrieved from "https://wiisports.fandom.com/wiki/User:Guy1234567890?oldid=94735"
Community content is available under CC-BY-SA unless otherwise noted.