Tommy is a CPU Mii from Wii Sports Resort and Wii Party. He is ranked #3 out of the Wii Sports Resort CPUs by overall skill level, with Nelly and Abe being the only CPUs better than him. His Total Skill Level is 3928.

Tommy is the Basketball Champion with a skill level of 1496 to 1500. His team consists of Eva and Tyrone, and is very tough to defeat, since all members, including him, of his team can jump higher, run faster, and shoot better. The player earns the Hoop Hero stamp when they beat him and his team. He is always faced at night when you face him as the champion, though he can be played at daytime after he and his team are beaten.

Overall, Tommy is one of the best Miis in Wii Sports Resort.

In Wii Party, Tommy is in Beginner Difficulty. 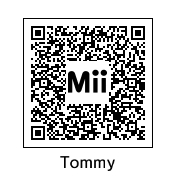 QR Code for Tommy, as seen in the portrait. 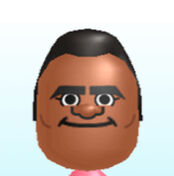 Tommy's image in a file in the September 2020 Nintendo leak.

Tommy as a rival in Swordplay Showdown.

All Black Armored enemies with Pablo in Stage 20 of Swordplay Showdown (Tommy is behind Hiroshi). 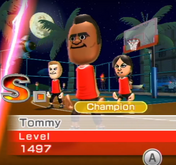 Tommy and his teammates Eva and Tyrone in Basketball.

Tommy about to play a Table Tennis match.

Tommy with Saburo and Mike in Wii Party. 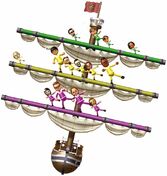 Tommy in artwork for Wii Party.