Time Bomb is a House Party mode in Wii Party.

Hold a button and pass the Remote without wobbling it

The bomb starts with the first player holding the Wii Remote, which is shown as a bomb on screen. They must hold down the button shown and said, rotate carefully to the next player to pass it to, they hold their button, then the first player can let go. The second player still holding the button, rotates to the next player, they hold down a button, the second player lets go and the cycle repeats with button holding and Wii Remote passing. (If this game is played with 2 players, instead of passing in a circle, the players just pass it to and from each other.)

When it's your turn to grab the Remote, hold down the button you are told to, turn around to the next player while still holding the button and when they press and hold their button, you can let go. Be careful not to shake the remote too much during the passing process. 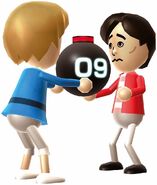 An official artwork of Time Bomb, Alisha and Takumi.