The Tennis Court is a court where games of Tennis are played, as implied by its name.

Two separate Tennis Courts variants are seen in Wii Sports. The first court is used in competitions and is enclosed by green clay walls and green bleachers. The court itself is almost completely green.

The second court is used in Tennis (training) games. The entire court is colored blue and is flanked by two other blue courts and a chain-link fence behind and in front of it. On the other side of the fence appears to be a forest.

Additionally, there is a way to use the blue variant in a competition.

Although Tennis cannot be played in Wii Sports Resort, a court can be found close to the Table Tennis table. The iPoint implies that dogs ran off with all the balls. 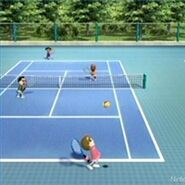