Tatsuaki (pronounced "TAH-TSOO-AH-KEE") is a CPU Mii from Wii Sports, Wii Sports Resort, and Wii Party. He is ranked #37 out of the Wii Sports Resort CPUs, by overall skill level. His Total Skill Level is 6132.

Tatsuaki is a top Pro in Tennis, being the 3rd best player with a skill level of 1900. He will play with Sarah or Maria.

His Baseball skill level is pretty good at 645 to 845 points, and he has a team of Andy, Tyrone, Yoko, Ai, Alex, Daisuke, Haru, and Naomi. He is the worst player to appear on a sometimes PRO team. He plays on the teams of Steph, Ryan, Hayley, Julie, Kathrin, Keiko, Michael, and Jackie.

In Wii Sports Resort, his skills seem to drop a bit.

In Basketball, he is good at a skill level of 626 to 630, and his teammates are Rainer and Rin.

In Wii Party, Tatsuaki is in Beginner Difficulty. 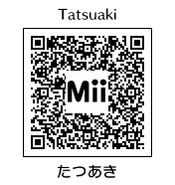 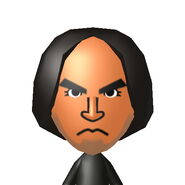 Tatsuaki's image in a file in the September 2020 Nintendo leak. 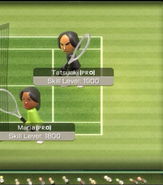 Tatsuaki doubling up with Maria in Wii Sports Tennis. 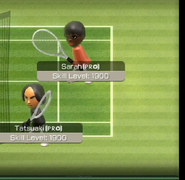 Tatsuaki doubling up with Sarah in Wii Sports Tennis. 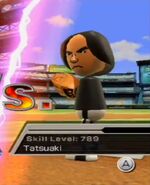 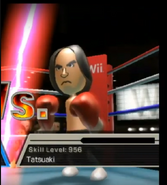 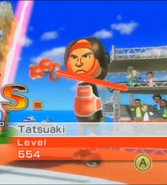 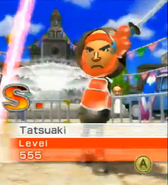 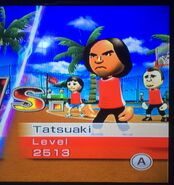 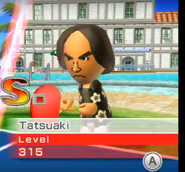 Tatsuaki and Abby are the worst pair.

Tatsuaki in another artwork for Wii Party.

Tatsuaki in an official artwork of Wii Party.