Takashi is a high Pro in Swordplay, being the 9th best player with a skill level of 1376 to 1380. Takashi wears Obese Black Armor as the Boss of Stage 12 in Swordplay Showdown. He sets himself up then attacks.

Takashi is, however, extremely bad at Basketball, being the 3rd worst player with a skill of 41 to 45, making him the 2nd worst male. His teammates are Anna and Andy. He also appears on Miguel’s team as a teammate.

He is also very bad at Cycling, being the 15th worst player coming in 84th out of 98.

In Wii Party, Takashi is in Advanced Difficulty. 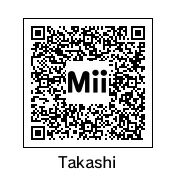 QR Code for Takashi, as seen in the portrait. 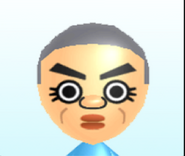 Takashi's image in a file in the September 2020 Nintendo leak.

Takashi as the Boss of Stage 12 in Swordplay Showdown. 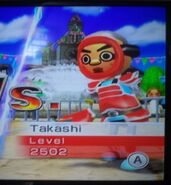 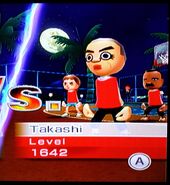 Takashi and his teammates Anna and Andy in Basketball. 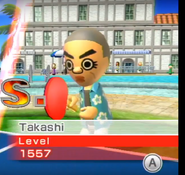 Takashi with Fritz and Michael in Wii Party.