Not to be confused with Chambara from Nintendo Switch Sports.

Swordplay is one of 12 games available to play in Wii Sports Resort. This sport takes advantage of the Wii MotionPlus. The game's main mechanic is using your Wii Remote like a sword to hit an opponent/opponents. There are three variations of the game, which are Duel, Speed Slice, and Showdown.

The objective of this mode is to knock your opponent off the high-rise platform. It is played in a two-out-of-three style match. The first player to win 2 rounds wins. You can still win if you win one round and tie two other rounds outside of the final round. If neither player can knock his/her opponent off twice within 3 rounds, then the round is a tie. If the game is tied, the game goes to a final round, where the playing field becomes extremely small, and the white and red portions of the platform will sink. The stamps are Met Your Match, Cliff Hanger, One-Hit Wonder, Straight to the Point, and Last Mii Standing. If you have beaten the Champion, at the Mii selection, hold the "1" button. Then you can use Matt's purple sword to fight while wearing the same armor that Matt wears, but blue. You will battle against Matt if your skill level is 1485 or higher.

Note: The opponents' levels in Duel and Speed Slice are the same.

After you beat the Champion, you can use Matt's Purple Sword and defeat Miis in a random order, all with the 1500 to 2500 armor (listed down below).

The Armors of Swordplay Duel/Speed Slice

The objective of this mode is to cut objects faster before your opponent does and be the first to get 10 points. Matt, the referee, will toss an object at the players, and you must cut them in the given direction before your opponent does. The slicing ways are horizontally (left or right), vertically (up or down), and diagonally. However, when you face Matt, Ryan will take his place as the judge. If both players slice the object in the same way simultaneously, the player who sliced faster gets the point.

*Seen as a secret target in Archery

The objective of this single-player mode is to defeat the oncoming horde of enemy sword fighters without getting hit three times. The player has three hearts and must defeat the army of sword-wielding adversaries without taking three hits. Each level has a Boss (each Boss has black armor and a purple sword) at the end of the level. They have three hearts and are hard to defeat (especially the later ones). This is the list, the levels in Swordplay Duel (and Speed Slice), and the picture of the Bosses from every level of Swordplay Showdown:

After clearing all the normal stages, the reverse stages are unlocked. These levels are notably much harder than their normal counterparts and go in the opposite direction.

The enemies who aren't Bosses can come in five different armor colors: Green, Gold, Red, Purple, or Black. Their behavior, health, and occurrence depend on what armor they're wearing. The Miis always appear in the same armor for a specific stage. They always use a red sword except in Volcano and Volcano Reverse, which in perspective, uses a light magenta sword instead due to the light in the volcano.

The Miis that come in this color of armor are the weakest and easiest to defeat. They sometimes will defend themselves when approaching the player but will rarely block (and only for a short period) when they are in striking distance of the player. Most of these Miis delay for a long time before attacking you, but some of them are slightly quicker. They have one heart. They are encountered commonly and in large quantities in many of the regular stages (Yoshi and Jake are the first two), but they do not appear at all in most of the reverse levels, with Stages 17 to 19 being the exceptions. Mia is the last Mii to wear this armor.

Most common Mii in this armor: Andy and Jessie

The Miis who wear this armor color are still not difficult to defeat at first, but their movesets are drastically different from those of the Green Armored enemies. In the regular stages, they almost only defend themselves and take a long time to attack. However, in the reverse stages, they gain more aggressive movesets (all attack more frequently and some attack twice in a row), and some of these Miis will even behave similar to Boss and Black armored Miis by wasting no time to accurately strike the player as soon as possible (Pablo and Stéphanie are the first two to exhibit this behavior, in Stage 11). Like Green Armor, they have one heart. These Miis are not too common at first (Misaki is the first one) but become abundant as the game progresses. They seem to be the opposite of Green Armors, considering they grow stronger and appear in larger quantities. In contrast, Green Armors never gain improved movesets and appear less in the later stages. Helen is the last Mii to wear this armor.

Most common Mii in this armor: Luca

The Miis that appear in this armor color are a little bit tougher and more dangerous than the last two types. They are primarily defensive and change the direction of their defense only a little. They will usually only attack after successfully blocking a player's swing. They also attack much faster than the early versions of the Gold Armored Miis. Some of them will twirl their swords in a circular motion before hitting the player, and the same thing goes for some Purple Armored opponents. Keiko is the first Red Armored opponent to exhibit this kind of behavior, and she shows this in Stage 15, though she may not display this behavior sometimes when the player goes through that stage. They have two hearts and first appear in Stage 2 (Gwen is the first one) and are present in many of the after that in increasing quantities. Haru is the last Mii to wear this armor.

Most common Mii in this armor: Yoshi

The Miis who wear this armor color behave identically to the Miis who wear red armor, with one exception. They constantly change the direction of their defense (especially when the player is moving their sword around) to make it much more difficult to hit them, making it much easier for the player to be counterattacked. In addition, they will occasionally switch the direction of their attack right before they swing. Some Purple Armored opponents will twirl their swords in a circular motion before hitting the player. Haru is the first Purple Armored opponent to exhibit this kind of behavior. She shows this in Stage 15 though sometimes, she may not display this kind of behavior when the player goes through that stage, or only either of them or two show this behavior. They have thick kneepads but have slimmer bodies than the Red Armored Miis, making them more challenging to hit. They have two hearts and first appear in Stage 6 (Stéphanie is the first one), and are also present in many stages after that. Luca and Sakura are the last two Miis to wear the regular variant of this armor.

Most common Mii in any Purple Armor variant: Chika

Miis who wear this type of armor have varying movesets and behaviors, and some can be much more difficult to defeat than others. The three movesets that these Miis have are:

Although these Miis are not Bosses, they will behave exactly like one. What sets them apart from a Boss is the color of the sword they use, which is red (the same color sword as all of the other armors) rather than the purple sword that the bosses have. They have varying levels of aggressiveness: Defensive in Stage 10, 13, and 20, Aggressive in Stage 12 ( Daisuke being the only one), 13, 14, 17, and 20, and Aggressive and Defensive in Stage 18, 19, and 20. Some of them twirl their swords in a circular motion before hitting the player, though they rarely exhibit this behavior. They are often as big as an actual Boss, but sometimes, they appear in smaller variants and are the same size as the other Miis. They have three hearts and first appear in Stage 10 (Eva and Abe are the first two) and are somewhat rare even after that. They only appear in slightly larger quantities in Stage 14 and Stage 19, and they appear in substantial amounts only in Stage 13 and Stage 20. (Matt (the final Boss) is the last Black Armored Mii in general, while Chris, George, and Mike are the last non-Boss Black Armored Miis.) There are five variants of Black Armor: Lanky, Small, Small Thin, Obese (reserved for bosses), and Bulky.

These appearances are for non-boss Miis only:

Most common Mii in any Black Armor variant: Tyrone 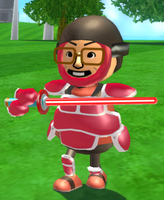 Asami as a Boss in Black Armor (Lanky) (Note the purple sword. Also note that Bosses never appear in the Small variant of Black Armor.

Cole, the Boss of stage one of Swordplay showdown

Matt is the final and most challenging Boss in Swordplay Showdown, since he is the Champion. He is bigger than the other Miis that wear Black Armor. The easiest way to defeat him is when Matt is in front of the Mii you are targeting. He is the most challenging Boss because he is quick to attack and counterattack, and even when you successfully block one of his attacks, he will try to stop you. Matt is ultimately defensive and strikes exceptionally often. He seldom lets you hit him and might easily use up all your hearts. However, since he has the largest hitbox in the game, it can be easy to hit when you are actually able to hit him. Once you defeat Matt, you win and have cleared all the stages!

Matt as the final boss in Swordplay Showdown