Not to be confused with Susana from Wii Sports Resort.

Susie is a CPU Mii from Wii Sports Club and Wii Party U. Her Total Skill Level is 250. She is ranked #12 in rankings, tied with Na-rae and Patricia.

In both Tennis and Baseball, she is a Pro at Grade ★5.

In Wii Party U, Susie is in Master Difficulty. 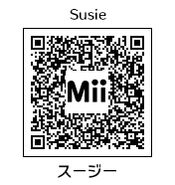 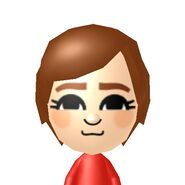 Susie and Marit in Tennis. 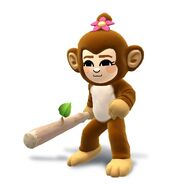 Susie in an artwork for Super Smash Bros 4.

Susie in a Wii Party U Artwork.

Susie in the Flight.

Susie with Olga and William.

A beta version of Susie with a forest green outfit and brown hair.

Pavel and Susie dancing in the Miitopia opening.

Susie in a Miitopia explanation as to how Spotpass works. (Pavel is also visible)

Susie in official StreetPass artwork, wearing a pink dress in contrast to her typical red one.

Susie having her face returned amongst various other Mii characters near the end of Miitopia.

Susie and Pavel without faces.
Add a photo to this gallery
Retrieved from "https://wiisports.fandom.com/wiki/Susie?oldid=225622"
Community content is available under CC-BY-SA unless otherwise noted.