Sophia is a CPU Mii from Wii Sports Club and Wii Party U. Her Total Skill Level is 62. She is ranked #53 in rankings.

In Tennis and Baseball, she is above average spectacularly at Grade 8.

In Boxing, she is a tad bit above average at Grade 6.

In Wii Party U, Sophia is in Expert Difficulty. 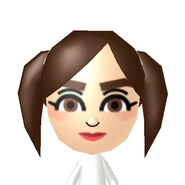 Sophia and Irina about to play Tennis.

Sophia on the Waiting Lobby in Mario Kart 8 Deluxe. 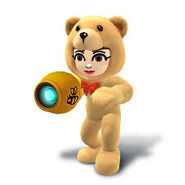 Sophia wearing the Bear Hat and Suit in an artwork for Super Smash Bros. for Wii U.

Sophia in Super Smash Bros. for Wii U.

Sophia (right) as a Sword fighter in Super Smash Bros. for 3DS. 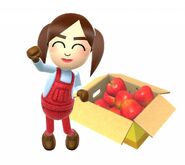 Wii Party U artwork of Sophia.

Sophia and friends on a Miiverse poster. 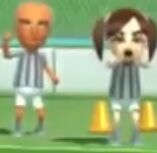 Sophia with Zi-Kai and Pavel.

Sophia in her swimsuit.

Sophia as a swimming referee.

Sophia in Spot The Sneak.

Sophia as she appears on Wii Party U's logo.

Sophia in her swimsuit on the results screen of Lap Happy with Léonie and Akira.

Sophia amongst other Mii characters in a Super Nintendo World attraction.

Sophia in Countdown Crisis just moments before being blown up.

Community content is available under CC-BY-SA unless otherwise noted.