In Swordplay, he is a high Pro, being the 6th best player with a skill level of 1421 to 1425. Shinta wears Lanky Black Armor as the boss of Stage 16 in Swordplay Showdown. He and Marisa, Barbara, Ian, and Steph attack quickly and then take their time to attack again.

Overall, Shinta is one of the best Miis in Wii Sports Resort.

In Wii Party, Shinta is in Expert Difficulty. 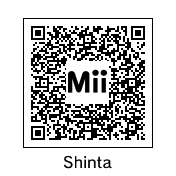 QR Code for Shinta, as seen in the portrait. 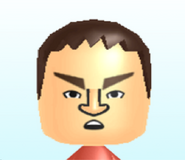 Shinta's image in a file in the September 2020 Nintendo leak. 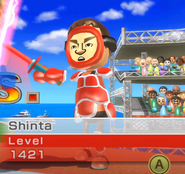 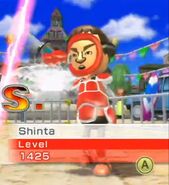 All the Swordplay Showdown Bosses.

Shinta as the boss of Stage 16 in Swordplay Showdown. 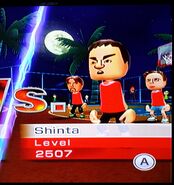 Shinta and his teammates Barbara and Gabriele in Basketball. 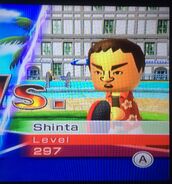 Shinta about to play a Table Tennis match.

Shinta (on the left) in Cycling.

All of the Expert CPUs in Wii Party.

Shinta as a zombie in Zombie Tag.

Shinta in Shifty Gifts with Susana and Gabi.