Wii Sports Wiki
Register
Don't have an account?
Sign In
Advertisement
in: Miis, Male Miis, Miis whose favorite color is Purple,
and 9 more

Ray is a Mii in Wii Fit, Wii Fit Plus, and Wii Fit U. He is the coach for Rhythm Boxing in all of those games.

Wii Fit, Wii Fit Plus, and Wii Fit U

Ray appears in Rhythm Boxing. He is the coach that teaches the player how to play and also what pattern the player will have to punch the punching bag in front of them.

Interestingly, his name doesn't actually show up in-game. Despite this, we still know his name is Ray since viewing his Mii data file extracted from the game's files shows his name is レイ, which translates to Ray.

Since Ray is one of the only three Miis to have a voice/voice actor, he is very special. He is voiced by Steve Heinke in the USA version of the game. Below are some voice clips of him extracted from the files of Wii Fit Plus:

"Alright, let's do this together."

"As you step forward, throw your first punch from the same side."

"Follow the rhythm, and throw a punch when you see the target."

"Throw your punches any way you want to."

"You'll get double points if you hit with perfect timing. Give it a try."

You can also download all of his clips (these clips and many more) in .wav form in this .zip file. 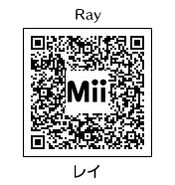 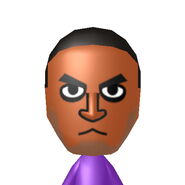