Not to be confused with Holly.

Polly is a CPU Mii seen in Wii Sports Club and Wii Party U. Her Total Skill Level is 260.

In Boxing, Polly is a Pro at Grade ★1, making her the second Pro Class Beginner. In Tennis and Baseball, she is one of the best players at Grade ★10 and also a Pro.

In Wii Party U, Polly is a Master Mii. 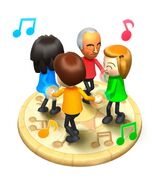 Wii Party U artwork with Polly (in green).

Polly with Alphonse in Miitopia.

Polly (Yellow Pikmin) with Rui in a Nintendo Land artwork.

Polly in a Kirby Suit.

Polly with Pit and Anne in Bowling. 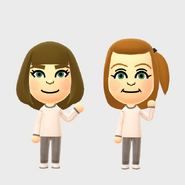 Polly and friends on a Miiverse poster.

Polly in her swimsuit.

Polly is in 1st place in Super Smash Bros. Ultimate

All of the CPU Miis in Wii Sports Club.
Add a photo to this gallery
Retrieved from "https://wiisports.fandom.com/wiki/Polly?oldid=144864"
Community content is available under CC-BY-SA unless otherwise noted.