Pierre (pronounced "PYEHR") is a CPU Mii from Wii Sports, Wii Sports Resort, and Wii Party. He is ranked #10 out of the Wii Sports Resort CPUs, by overall skill level. He has the highest Total Skill Level, at 9309 points.

In Tennis, Pierre has a great skill level at around 820 to 850 and plays with Jackie or David.

In Baseball, he is a high Pro, being the 8th best player with around 1044 to 1243 in skill. His team consists of Takumi, Shinnosuke, Hiroshi, Rin, Emily, Sarah, Saburo, and Theo. Pierre plays in the Baseball teams of Steve, Helen, Maria, David, Miyu, Nick, and the Champion Sakura.

In Basketball, Pierre is a high Pro, being the 9th best player at skill level 1376 to 1380 and plays with Misaki and Shohei.

Overall, Pierre is one of the best Miis.

In Wii Party, Pierre is in Master Difficulty. 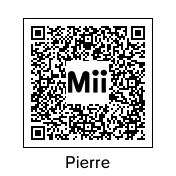 Pierre's QR Code, as seen in the portrait. 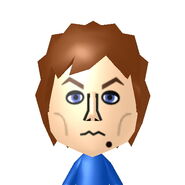 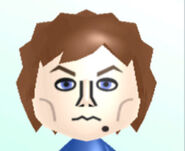 Pierre's image in a file in the September 2020 Nintendo leak. 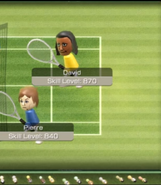 Pierre doubling up with David in Wii Sports Tennis. 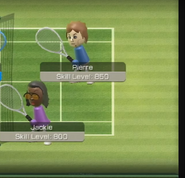 Pierre doubling up with Jackie in Wii Sports Tennis. 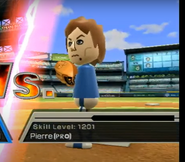 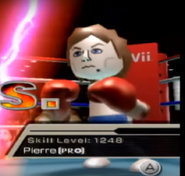 Pierre as a rival in Swordplay Showdown. 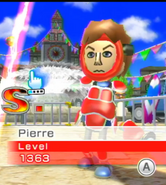 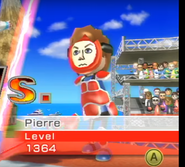 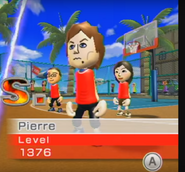 Pierre and his teammates Shohei and Misaki in Basketball. 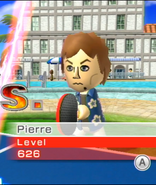 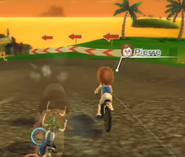 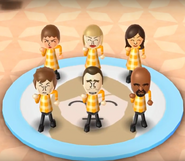 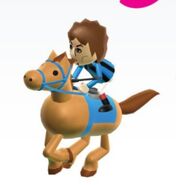 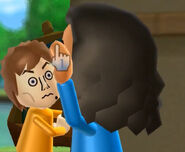 Pierre in Wii Party being found in Hide-And-Peek.

Pierre in the Pilotwings stage of Super Smash Bros. Ultimate.