In Tennis, Oscar is really terrible, being the 8th worst player with a skill level of 82 to 96. He plays with either Miyu or Shinnosuke.

In Baseball, he's not very good at 266 to 444 and his team members are Chris, Martin, Fumiko, Misaki, Silke, Jessie, Abby, and Kentaro. Oscar plays on the Baseball teams of Mike, Jake, James, Marco, Anna, Yoshi, Ren, and Lucía.

In Wii Sports Resort, Oscar improves quite a lot compared to his performance in Wii Sports.

In Swordplay, Oscar is really good, with a level of 926 to 930. You fight against him in the evening, but he can be played against in the daytime after beating the Champion.

Overall, Oscar had a good improvement from Wii Sports.

In Wii Party, Oscar is in Advanced Difficulty. 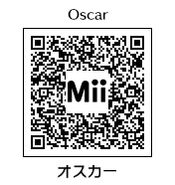 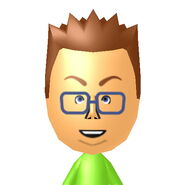 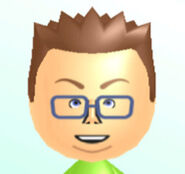 Oscar's image in a file in the September 2020 Nintendo leak. 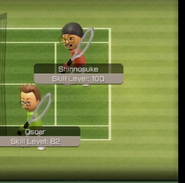 Oscar doubling up with Shinnosuke in Wii Sports Tennis. 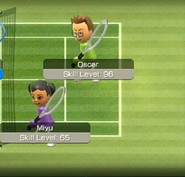 Oscar doubling up with Miyu in Wii Sports Tennis. 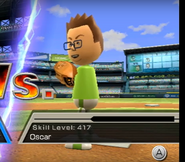 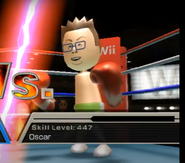 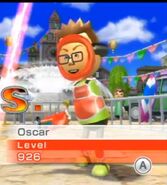 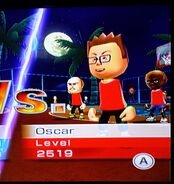 Oscar and his teammates Ian and Emma in Basketball 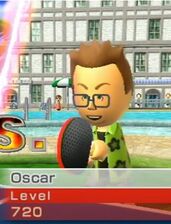 Oscar in Wii Party with Cole and Takashi.

Oscar in a leaked design document for Swordplay Showdown.