Na-rae (pronounced "NAH-ray") is a CPU Mii from Wii Sports Club and Wii Party U. Her Total Skill Level is 350.

In all three sports, Na-rae is one of the best players at Grade ★10.

In Wii Party U, Na-rae is a Master Mii. 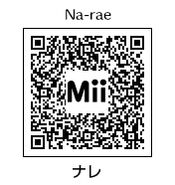 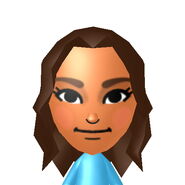 Na-rae in Wii Party U.

Na-rae is in the middle.

Na-rae on the Right as a Mii Brawler (Smash 3DS)

Na-rae as a swimming referee.

Na-rae with Olga and Barry.

Na-rae with Jianjun and Yuya.

Na-rae in her swimsuit.

Na-rae with Yuya and Joana.

Na-rae in Tomodachi Life along with Jianjun, Sara and Anne.

All of the CPU Miis in Wii Sports Club.
Add a photo to this gallery
Retrieved from "https://wiisports.fandom.com/wiki/Na-rae?oldid=161355"
Community content is available under CC-BY-SA unless otherwise noted.