Not to be confused with Mi-sun.

Mitsu (pronounced "MEET-soo") is a CPU Mii from Wii Sports Club and Wii Party U. Her Total Skill Level is 20. She is ranked #100 in rankings.

Mitsu is the worst mii in Wii Sports Club, showing some of the worst skills. In Tennis, she is quite low at Grade 2 and plays mainly with others up to Grade 5. In Boxing, she has a somewhat better skill at Grade 6.

In Wii Party U, Mitsu is a Beginner Mii. 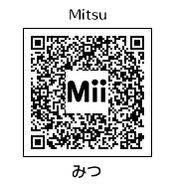 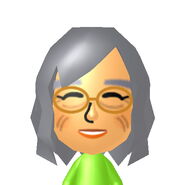 Mitsu is the 2nd one to the left.

Mitsu falling down from a bridge, along with Maria.

Mitsu as a swimming referee.

A beta version of Mitsu, showing that her hair is in buns instead of the shoulder length wavy ones.

A possible Early Design (as mentioned in the trivia) for Mitsu standing right next to the blonde girl.
Add a photo to this gallery
Retrieved from "https://wiisports.fandom.com/wiki/Mitsu?oldid=203101"
Community content is available under CC-BY-SA unless otherwise noted.