Mii Maestro (Open Orchestra in PAL) is a mode from Wii Music. The players use the Wii Remote as a baton to conduct an orchestra, swinging the controller up and down to a certain tempo. Different movements affect the performance of the orchestra. There are no indicators of any kind to show how well the player is performing, forcing the player to try to match the original music from memory, and experiment to find which movements will yield a higher score. Multiplayer is cooperative; several players conduct the same orchestra at once, and are scored based how harmoniously they perform. 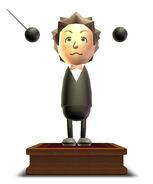