Marit is a CPU Mii from Wii Sports Club and Wii Party U. Her Total Skill Level is 260. She is ranked #6 in rankings, tied with Bowen and Polly.

In Tennis and Baseball, she is a great Pro at Grade★6.

In Wii Party U, Marit is in Expert Difficulty. 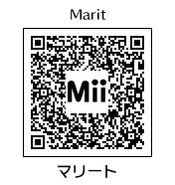 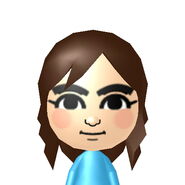 Marit and Susie in Tennis.

Marit in Super Smash Bros. for Wii U.

Marit and Alice in Mario Kart 8 with racing suits and amiibo.

Marit in a Yoshi Suit.

Marit in Mario Kart 8 with Rie, Joseph, Alice and Daisuke.

Wii Party U artwork of Marit.

Marit as a chef.

Marit and Pavel in Wii Party U.

Her early name was “Kate” apparently.

All of the CPU Miis in Wii Sports Club.
Add a photo to this gallery
Retrieved from "https://wiisports.fandom.com/wiki/Marit?oldid=226085"
Community content is available under CC-BY-SA unless otherwise noted.