If you're looking for the Mii from Wii Sports, go to Maria (Wii Sports).

Maria is a CPU Mii from Wii Sports Club and Wii Party U. Her Total Skill Level is 112.

In Tennis and Baseball, she is an average opponent. Her Grade is 6 in both of these games. In Boxing, she is one of the best players. Her Grade is ★8 and she is a Pro.

In Wii Party U, Maria is a Standard Mii. 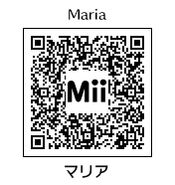 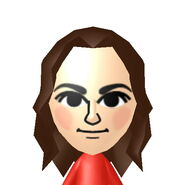 Maria on the Waiting Lobby in Mario Kart 8 Deluxe.

Maria falling down from the bridge along with Mitsu.

Maria is on the right with Skip (Left) and Barbara (Middle).

Maria with Carlo and José.

Maria as a swimming referee. 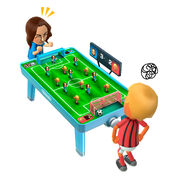 Maria in a Wii Party U Artwork.

Maria on a Semi-Protected Article. 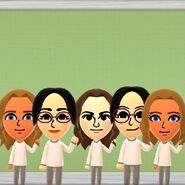 All of the CPU Miis in Wii Sports Club.
Add a photo to this gallery
Retrieved from "https://wiisports.fandom.com/wiki/Maria_(Wii_Sports_Club)?oldid=159362"
Community content is available under CC-BY-SA unless otherwise noted.