In Tennis, Marco is average and his skill level is 390 to 410 and he plays with Haru or Naomi.

In Baseball, he does okay at skill 340 to 524. His Baseball team consists of James, Jake, Mike, Oscar, Chris, Martin, Fumiko, and Misaki. Marco plays on the baseball teams of Anna, Yoshi, Ren, Lucía, Rachel, Ashley, Naomi, and Haru.

In Swordplay, Marco is a Pro with a level of 1121 to 1125. Marco wears Obese Black Armor as the Boss of Stage 7 in Swordplay Showdown. He and Sarah share the moveset of the Red Armored Miis. He is defensive and sometimes attacks when the time is right.

In Basketball, he is pretty good. His skill is 656 to 660. He plays with Rainer and Marisa.

In Table Tennis, he is terrible, being the 4th worst player with a skill of only 56 to 60.

In Wii Party, Marco is in Advanced Difficulty. 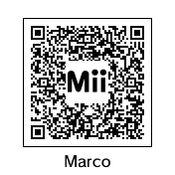 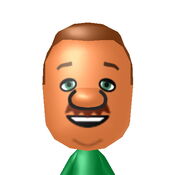 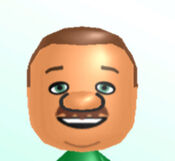 Marco's image in a file in the September 2020 Nintendo leak. 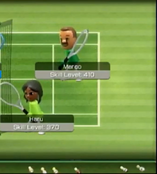 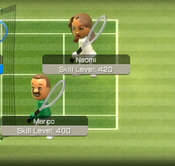 Marco doubling up with Naomi in Wii Sports Tennis. 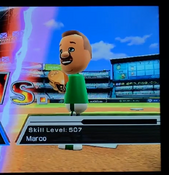 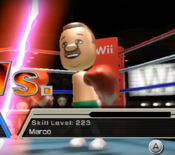 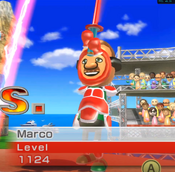 Marco as the boss of Stage 7 in Swordplay Showdown.

Marco and his teammates, Rainer and Marisa in Basketball. 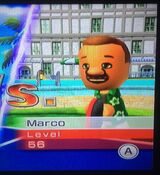 Marco is on the right.

Marco in a minigame with Gabi, Saburo and Eduardo. 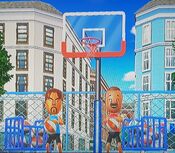 Gabriele and Marco in Basket Bonanza. 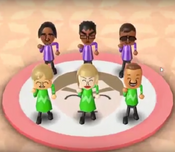 Macro on the Japanese website with Gabriele, and Hiromi.