Jesús (pronounced "hay-SOOS") is a CPU Mii from Wii Sports Club and Wii Party U. His Total Skill Level is 68. He is ranked #52 in rankings.

In Wii Party U, Jesús is an Expert Mii. 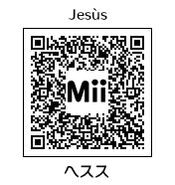 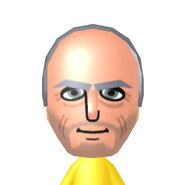 Jesús with Marit and Eduardo.

Jesús with Paula and Steven.

Jesús in the Flight.

Jesús with Dunbar and Claudia.

Jesús with Skip and Zi-Kai.

Jesús with Leonel and Skip.

In order: Jesús, Elena, Daisuke, Marit, Shu-Hui, Rie, Pit, Polly, Léonie (without wrinkles), and Massimo lined up on official artwork for Mario Kart 8 Deluxe.
Add a photo to this gallery
Retrieved from "https://wiisports.fandom.com/wiki/Jes%C3%BAs?oldid=203439"
Community content is available under CC-BY-SA unless otherwise noted.