Irina (pronounced "EYE-ree-nuh") is a CPU Mii from Wii Sports Club and Wii Party U. Her Total Skill Level is 124. She is ranked #39 in rankings.

In both Tennis and Baseball, Irina is good at Grade 7. In Boxing, she is one of the best players at grade ★8.

In Wii Party U, Irina is in Advanced Difficulty. 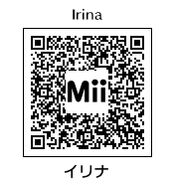 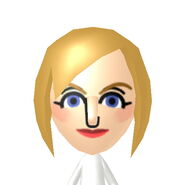 Irina and Maria about to play Tennis. 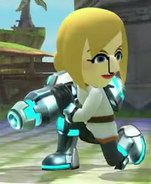 Irina in Super Smash Bros. for Wii U.

Irina, Enrique, Akira, and Giulia in Mario Kart 8 but with racing suits.

Irina in a Mario Kart 8 trailer.

All of the CPU Miis in Wii Sports Club.
Add a photo to this gallery
Retrieved from "https://wiisports.fandom.com/wiki/Irina?oldid=221081"
Community content is available under CC-BY-SA unless otherwise noted.