Wii Sports Wiki
Register
Don't have an account?
Sign In
Advertisement
in: Wii Party U, Minigames, 4-Player Minigame,
and 2 more

Ice Spinners is an All-Play Minigame in Wii Party U.

The player(s) must spin as many times as possible to get points. Whomever gets the most points wins. If they don’t spin in enough time, their Mii will fall. Depending on where the Mii faces after the spin, they will get a different amount of points (front-facing = 20, side = 10, backwards = 1, dizzy - 0).

The first default record for this Minigame is 42 points, set by Barbara, a Master Mii (known as Elena). 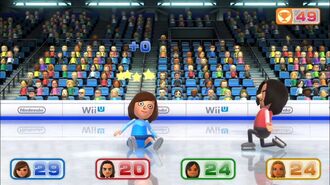