In Swordplay, Ian is awful, being the 11th worst player with a skill level of 161 to 165. He wears Obese Black Armor as the Boss of Stage 14 in Swordplay Showdown. He and Marisa, Barbara, Shinta and Steph attack quickly and then take their time to attack again.

He is an early Pro in Basketball, with a skill of 1091 to 1095, and his teammates are Barbara and Oscar.

In Table Tennis, he does really poorly, with a skill level of 281 to 285. He uses a hotel slipper along with Emma, Chika, and Steve. He will, however, use a normal paddle if he is faced after the Champion Lucía is beaten.

In Wii Party, Ian is in Standard Difficulty.

(His Japanese and Korean names are identical to each other and his English name.) 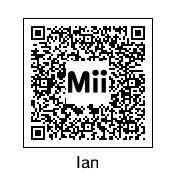 QR Code for Ian, as seen in the portrait. 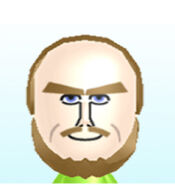 Ian's image in a file in the September 2020 Nintendo leak.

Ian on the Swordplay Showdown preview with Jessie and Holly.

Ian as the Boss of Stage 14 in Swordplay Showdown. 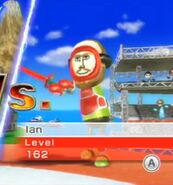 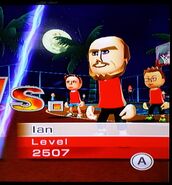 Ian and his teammates Barbara and Oscar in Basketball. 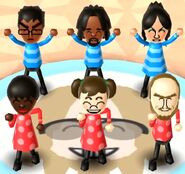 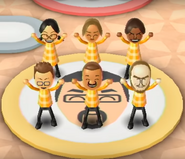