Hiroshi (pronounced "HEE-RO-SHEE") is a CPU Mii from Wii Sports, Wii Sports Resort, and Wii Party. He is ranked #83 out of the Wii Sports Resort CPUs, by overall skill level. His Total Skill Level is 4976, and he is tied with Oscar.

In Tennis, Hiroshi is the worst player with a skill level of 0 to 3, making him the worst male in a sport. He, along with Abby, Ren, Chris, and Shouta, has a lower skill level than the starter team of Matt and Miyu. If you lose the first match, he will play against you with Shouta.

He is way better at Baseball, and is usually in Pro Class, with a skill level of around 981 to 1180. He has a team of Rin, Emily, Sarah, Saburo, Theo, Shouta, Víctor, and Eva. Hiroshi plays on the teams of Shinnosuke, Takumi, Pierre, Steve, Helen, Maria, David, and Miyu.

In Basketball, he has a decent skill level of 521 to 525. His teammates are Vincenzo and Ryan.

In Wii Party, Hiroshi is in Standard Difficulty.

In his Wii Music artwork, he is Hand Clapping. 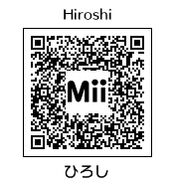 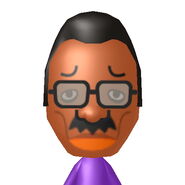 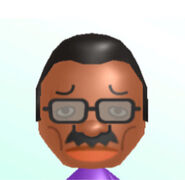 Hiroshi's image in a file in the September 2020 Nintendo leak. 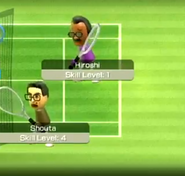 Hiroshi doubling up with Shouta in Wii Sports Tennis. 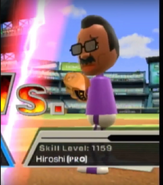 Hiroshi after casting an out in Baseball. 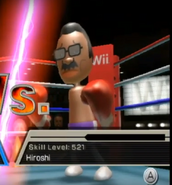 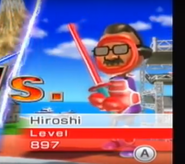 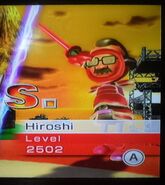 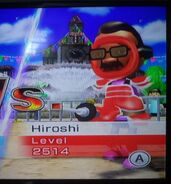 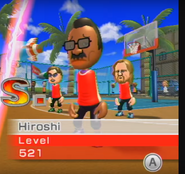 Hiroshi and his teammates Ryan and Vincenzo in Basketball. 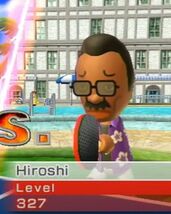 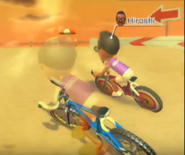 Hiroshi as a rival at Swordplay Showdown.

Another photo of Hiroshi as a rival in Swordplay Showdown.

A third photo of Hiroshi as a rival in Swordplay Showdown.

A fourth photo of Hiroshi as a rival in Swordplay Showdown.

Hiroshi with Ai and Vincenzo.

A Wii Music artwork of Hiroshi.
Community content is available under CC-BY-SA unless otherwise noted.
Advertisement