If you're looking for the Mii from the Wii with the same name, go to Hiromi (Wii).

Not to be confused with Hiroshi.

Hiromi (pronounced "HEE-RO-MEE") is a CPU Mii in Wii Sports Club and Wii Party U. Her Total Skill Level is 31, tied with every other Advanced Baseball teammate.

She only competes as a Baseball teammate, appears as a spectator in Tennis, and appears as a coach in Boxing.

In Wii Party U, Hiromi is in Advanced Difficulty. 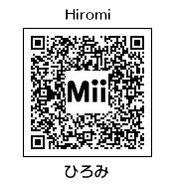 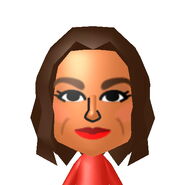 Hiromi in a Spotpass artwork.

Hiromi with Alice and Bernd in a My Nintendo artwork.

Hiromi with Ilka and Ricardo in Wii Party U.