If you're looking for the Mii from the Wii U with the same name, go to Hiromi (Wii U/3DS).

Not to be confused with Hiroshi.

In Basketball, she is terrible, being the 13th worst player with a skill level of 191 to 195. She is the last player in the 100s. She has Víctor and Martin on her team.

In Wii Party, Hiromi is in Advanced Difficulty. 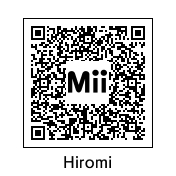 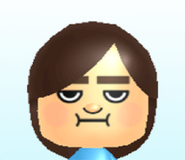 Hiromi's image in a file in the September 2020 Nintendo leak.

Hiromi as a rival in Showdown.

Another photo of Hiromi as a rival in Swordplay Showdown. 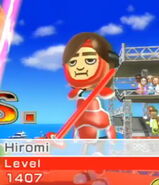 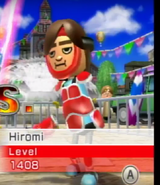 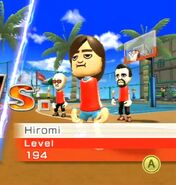 Hiromi and her teammates Martin and Víctor in Basketball. 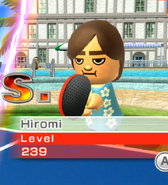 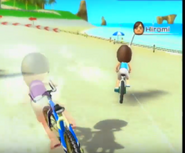 Hiromi in Wii Party with Emily and Daisuke.

Hiromi on the Japanese website with Marco, and Gabriele.