Hiromasa (pronounced "HEE-RO-MAH-SAH") is a CPU Mii from Wii Sports Resort and Wii Party. He is ranked #54 out of the Wii Sports Resort CPUs, by overall skill level, tied with Rachel. His Total Skill Level is 3688.

In Swordplay, Hiromasa isn't good, at a skill level of 221 to 225. Hiromasa wears Lanky Black Armor as the Boss of Stage 5 in Swordplay Showdown. He and Gabi both twirl their swords to be more intimidating. They share a moveset of a thin purple armored enemy in a few reverse stages.

In Basketball, he is pretty good, with a skill level of 776 to 780. His team members are Eduardo and Giovanna.

In Wii Party, Hiromasa is in Master Difficulty. 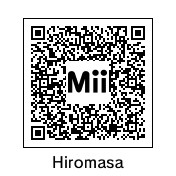 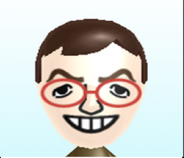 Hiromasa's image in a file in the September 2020 Nintendo leak.

Hiromasa as the boss of Stage 5 in Swordplay Showdown. 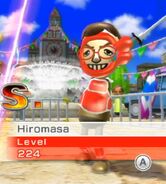 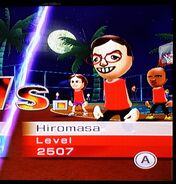 Hiromasa and his teammates Eduardo and Giovanna in Basketball. 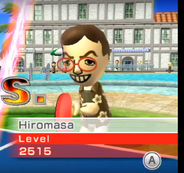 Hiromasa about to play a Table Tennis match. 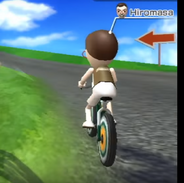 Hiromasa with Stéphanie and Eddy. 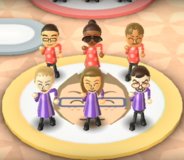 A sad Hiromasa.
Community content is available under CC-BY-SA unless otherwise noted.
Advertisement