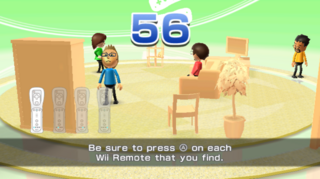 Hide 'n' Hunt is a House Party mode in Wii Party that is played in a real room. 2-4 players can play it with 1-4 Wii Remotes. Like every other House Party game, CPUs aren't in this mode.

In each round, one player is the hider, and the others are the hunters. They start in a room and after the game decides who the hider is, the game tells the hunters to leave the room, having the hider alone. After that, the hider hides the other player's Wii Remotes in the room while the others are out of the room. They have 120 seconds to do so, and once they have hidden a remote, they press A on it to prove they hid it to the game. After this process, they call the other players (the hunters) and they must find the Wii Remotes within the time limit (120 seconds), while the hider sits on the couch. (When the hunters are supposed to come back, the hider's Mii will whistle, and the hunter's(s) Mii(s)will come back in.) The winner is the person with the most points after all rounds have been completed. Every 10 seconds, the Wii Remotes will make a sound that will help the players to find them. The hunters have 120 seconds to find each hidden Wii Remote. When a player finds a remote, they must press A for the game to know they've found a remote, and give the hider points. The number of points rewarded to the hider is equal to the number of seconds the finder(s) took to find the Wii Remote. For example, if a finder took 98 seconds to find the Wii Remote, the hider will be rewarded 98 points. If the players fail to find every Wii Remote within the time limit, the hider gets 120 points.