Not to be confused with Haruka.

In Tennis, Haru is not good with a skill level of 360 to 380. She plays with either Marco or Yoshi.

In Baseball, she is good with a skill level of 491 to 696. She has a team consisting of Naomi, Ashley, Rachel, Lucía, Ren, Yoshi, Anna, and Marco. Haru plays on the teams of Daisuke, Alex, Ai, Yoko, Tyrone, Andy, Tatsuaki, and Steph.

Haru has a good improvement in Wii Sports Resort.

Haru is a high Pro in Basketball, being the 7th best player with a skill level of 1406 to 1410. Her teammates are Misaki and Abe. She is the first opponent in the 1400s.

In Wii Party, Haru is in Beginner Difficulty. 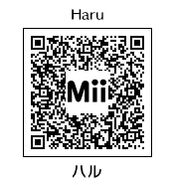 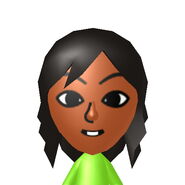 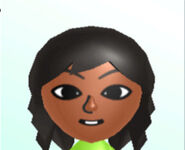 Haru's image in a file in the September 2020 Nintendo leak. Notice the different hair shape that is not available to be selected in the Mii Channel. 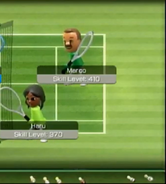 Haru doubling up with Marco in Tennis. 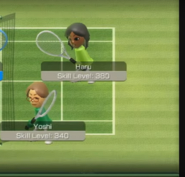 Haru doubling up with Yoshi in Tennis. 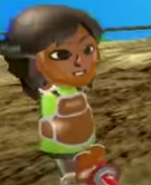 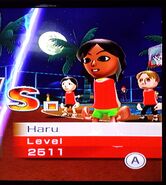 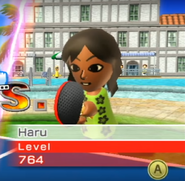 Baby Haru with Ian as the babysitter.

Haru as a baby in Cry Babies. 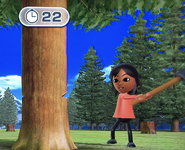 Haru in Board Game Island.

1-in-1 Soccer with Luke vs. Haru.
Community content is available under CC-BY-SA unless otherwise noted.
Advertisement