Haixiang (Pronounced "HIE-SHYAHNG") is a CPU Mii from Wii Sports Club and Wii Party U. His Total Skill Level is 31, tied with every other Advanced Baseball Teammate.

He doesn't compete in Tennis nor Boxing, though he does appear as a spectator or a coach (respectively).

He only compete as a Baseball teammate.

In Wii Party U, Haixiang is in Advanced Difficulty. 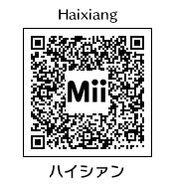 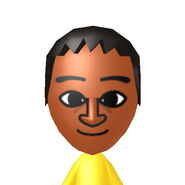 Haixiang in a Wii Party U artwork.

Haixiang in Miitopia as a traveler, standing behind Alisha.

Haixiang in Highway Rollers with Jialan and Ricardo.

Haixiang in National Streetpass Promo with Akira, Anne and Alphonse.

Haixiang as a swimming referee 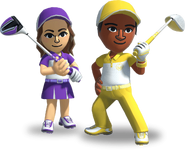 Haixiang with Mizuho in an episode of The Cat Mario Show.

Haixiang as a Mii Swordfighter