Wii Sports Wiki
Register
Don't have an account?
Sign In
Advertisement
in: Miis, Female Miis, Miis whose favorite color is Pink,
and 13 more

Guest F is a Pre-loaded Mii available for use in titles that feature Mii support, which includes Wii Sports games, Wii Party games, and other games with Mii support.

She has white skin, brown hair (the same hair as Hiromi (Wii)) and black eyes, and her favorite color is pink.

The design of the Mii Gunner used in promotional material and in-game renders is based on an edited version of Guest F. In this case, her hair uses a different design and color from the preloaded version, along with a smaller mouth and a different favorite color (orange instead of pink). She is also based on the default female Mii in Mii Maker, though again, with a different hairstyle and color (red instead of pink).

The Mii Gunner in the Switch game isn't the same that the Mii Gunner in Super Smash Bros for Wii U & 3DS but is also based on an edited version of Guest F. She has a different hairstyle (Same as Clara's one, except it is not symmetrical.) and her hair is deep brown. Her nose and mouth are smaller and have a different style. Her favorite color there is yellow instead of pink. 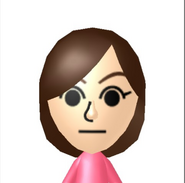 Guest F and the default male Mii teasing each other in the Wii Play main menu. 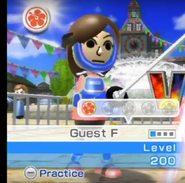 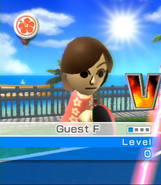 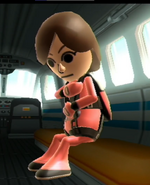 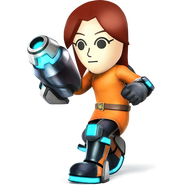 Mii Gunner (Super Smash Bros. for Wii U and 3DS).