Wii Sports Wiki
Register
Don't have an account?
Sign In
Advertisement
in: Miis, Male Miis, Miis whose favorite color is Red,
and 13 more

Guest C is a Pre-loaded Mii available for use in titles that feature Mii support, which includes Wii Sports Games, Wii Party games, and other games with Mii support. He is also the default male Mii in the Mii Maker, only with darker skin.

As Mr. Tomo, his design has a less paler skin.

The design of the default Mii Brawler used in promotional material and in-game renders is based on Guest C. Unlike Guest C, however, the Mii Brawler's skin tone is the palest option, he has black, messier hair (the same as Zi-Kai), and his eyebrows use a different design and are thinner.

Like in the previous game, the default Mii Brawler is based on Guest C. However, a few more changes were made to his design. This time around, the Mii Brawler has a skin tone that is slightly paler than Guest C's, but darker than the palest option. The Mii Brawler has long black hair (the same as Ai and Yuya), and while his eyebrows share Guest C's design, but is shifted down by 2 and are thinner. His nose is smaller, and he is sporting a serious frown, which is also smaller and thinner than Guest C's mouth.

The promotional Mii Brawler can be unlocked by saving him in World of Light's Dark Realm.

Guest C himself, meanwhile, appears as an opponent in certain characters' classic modes, like Bowser's. In there, his voice is randomized. 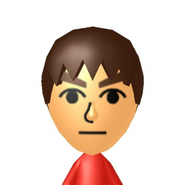 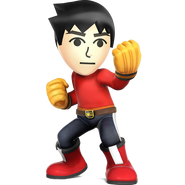 Mii Brawler, who is based on Guest C, and Na-rae in the Mii Fighter Creation Menu (Smash 3DS).

Super Smash Bros. Ultimate's Mii Fighters. Like in 3DS, Mii Brawler is based on Guest C. 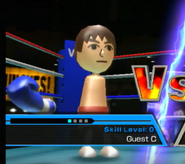 Guest C against Emily in Dogfight. 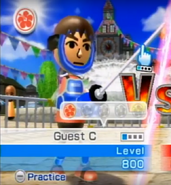