Guest B is a pre-loaded Mii available for use in titles that feature Mii support, which includes Wii Sports Games, Wii Party games, SSB4/Ultimate, and other games with Mii support.

He has white skin, dark blonde hair (the same hair as Vincenzo), and blue eyes, and his favorite color is royal blue.

He (as a Mii swordfighter) is edited again, this time with a different hairstyle (same as Jake and Barbara, except in a different direction), hair color and his body has been made into more human-like.

The promotional Mii Swordfighter can be unlocked by saving him in World of Light's Light Realm.

Guest B himself, meanwhile, appears as an opponent in certain characters' classic modes, like Sheik's. In there, his voice is randomized. 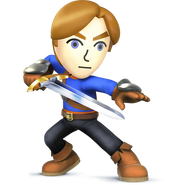 Mii Swordfighter (Super Smash Bros. for Wii U and 3DS)

Guest B and Sophia in the Mii Fighter Creation Menu (Smash 3DS).

Guest B in Super Smash Bros for 3DS with Chris and Rie.

Mii Fighters in SSBU (Mii Swordfighter is on the right).

Guest B with Rachel, Silke, and Eduardo

Guest B in Wii Music. 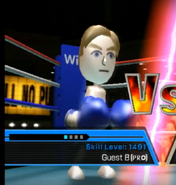 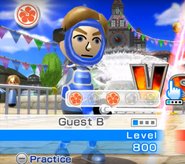 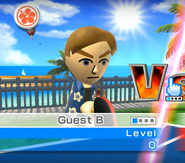 Add a photo to this gallery
Retrieved from "https://wiisports.fandom.com/wiki/Guest_B?oldid=224267"
Community content is available under CC-BY-SA unless otherwise noted.