In both Tennis and Baseball, she is a really good Pro at Grade ★7.

In Wii Party U, Giulia is in Expert Difficulty. 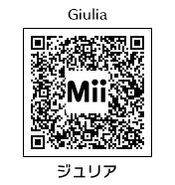 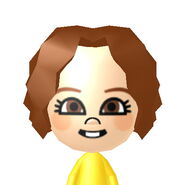 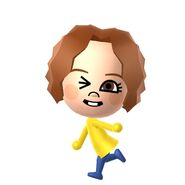 WhoAmI (LilGreenYoshi) against Giulia and Donna.

Giulia and friends in Mario Kart 8. (Please look at her behind Enrique and Akira)

Giulia on the Waiting Lobby in Mario Kart 8 Deluxe.

Giulia on the Wii U Miiverse loading screen, center left.

Giulia with Pavel in Miitopia.

Giulia, Araceli, Erick and Pit in a promotional art for Set a Mii feature. 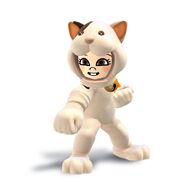 Giulia in the Cat Suit and Hat for an artwork for Super Smash Bros. for Wii U.

Giulia In the Toad Hat and Suit in Super Smash Bros. for Wii U.

Giulia and friends on a Miiverse poster

Giulia appearing on a My Nintendo pop-up message alongside with Akira.

Giulia and Xiaojian in Cat Suits in SSB4. 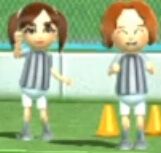 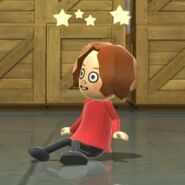 Giulia after being blown up in Countdown Crisis.

Giulia in the Flight.

Giulia as a swimming referee.

Giulia with Léonie and Claudia.

Giulia in a StreetPass picture showing off the various emotions that the game has, representing the sad emotion.

Giulia as she appears in a StreetPass video from the official Japanese Nintendo YouTube channel. The text roughly translates to "Good morning!"

Giulia amongst other Mii characters in a Super Nintendo World attraction.

Giulia in yet another promotional art of Miiverse.

Giulia's poses from the Miiverse loading screen (Wii U).

Giulia and friends in MyNintendo.

Giulia and Araceli from the My Nintendo account creation page.