Not to be confused with Gabi.

In Swordplay, he has a low skill level of 266 to 270. Gabriele wears Bulky Black Armor as the Boss of Stage 10 in Swordplay Showdown. He and Tomoko share a moveset of a Black Armored Mii that doesn't defend after failing to attack. They also share Silke's moveset in Stage 2.

In Table Tennis, he is pretty terrible, with a skill level of 41 to 45.

In Cycling, he does pretty well coming in 43rd out of 98.

In Wii Party, Gabriele is in Advanced Difficulty.

In Nintendo Switch Sports, Gabriele’s name is misspelled. Instead of “Gabriele”, his name is “Gabriel.” 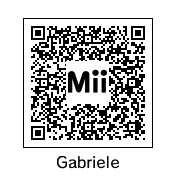 Gabriele's QR Code, as seen in the portrait. 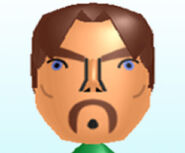 Gabiele's image in a file in the September 2020 Nintendo leak.

Gabriele as the boss of Stage 10 in Swordplay Showdown. 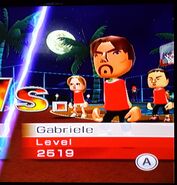 Gabriele and his teammates, Ursula and Shinta in Basketball. 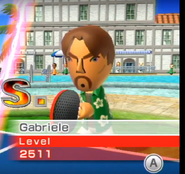 Gabriele about to play a Table Tennis match. 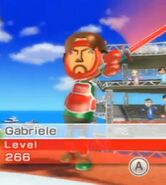 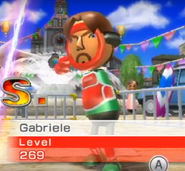 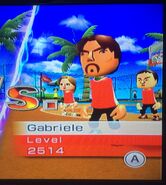 Gabriele in his swimsuit.

Gabriele in Strategy Steps along with Rin, Michael and Misaki.

Gabriele on the Japanese website with Marco, and Hiromi.
Community content is available under CC-BY-SA unless otherwise noted.
Advertisement