Not to be confused with Gabriele.

In Swordplay Duel and Speed Slice, she is a top Pro, being the 4th best player with a level of 1451 to 1455. She wears Lanky Black Armor as the Boss of Stage 2 in Swordplay Showdown. She and Hiromasa share a moveset of a thin purple armor enemy in a few reverse stages. They both twirl their swords to be more intimidating.

She is far back in Cycling, though she is acceptable, coming in 69th out of 98.

In Wii Party, Gabi is in Expert Difficulty. 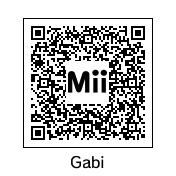 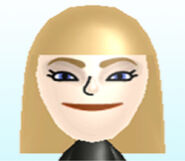 Gabi's image in a file in the September 2020 Nintendo leak.

Gabi as the boss of Stage 2 in Swordplay Showdown. 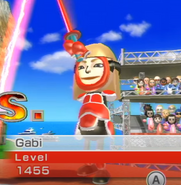 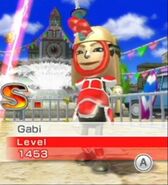 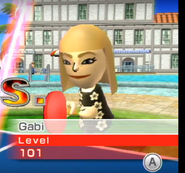 Gabi about to play a Table Tennis match.

Gabi with Midori and Theo in Wii Party.

Gabi taking a picture with two other Miis.