Eva is a CPU Mii from Wii Sports, Wii Sports Resort, and Wii Party. She is ranked #6 out of the Wii Sports Resort CPUs, by overall skill level. Her Total Skill Level is 9133, higher than all Miis except for Pierre.

In Tennis, Eva is a top Pro, being the 5th best player with a skill level of 1800. She usually plays with Maria, but sometimes she plays with Tyrone.

In Baseball, she is sometimes a Pro at a skill level of 821 to 1033. Her team consists of Jackie, Michael, Keiko, Kathrin, Julie, Hayley, Ryan, and Steph. She plays on the Baseball teams of Víctor, Shouta, Theo, Saburo, Sarah, Emily, Rin, and Hiroshi.

In Swordplay, Eva is a Pro at a skill level of 1136 to 1140. She is one of the three Miis that wear Black Armor in Stage 10 of Swordplay Showdown, along with Abe and the Boss Gabriele. She acts like a Purple Armor, being defensive and taking the time to attack.

In Basketball, Eva is a top Pro and Vice-Champion at a skill level is 1481 to 1485. She plays on the Champion Tommy's team along with Tyrone.

However, Table Tennis is the only sport where Eva performs poorly in, being the 8th worst player at a skill level of 116 to 120.

Overall, Eva is one of the best Miis.

In Wii Party, Eva is in Expert Difficulty.

(Her Japanese and Korean names are identical to each other.) 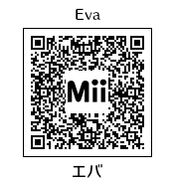 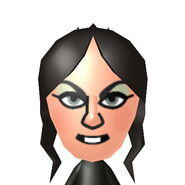 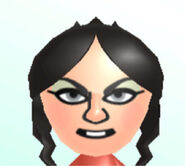 Eva's image from a file in the September 2020 Nintendo leak. Notice the different favorite color.

Eva doubling up with Tyrone in Wii Sports Tennis. 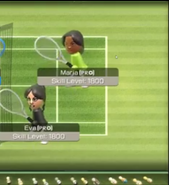 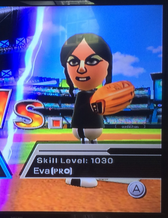 Eva as a non-Pro in Baseball. 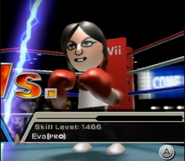 Eva as a rival in Swordplay Showdown.

Eva with Abe and boss Gabriele in Swordplay Showdown. 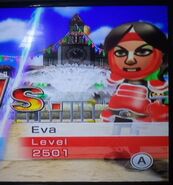 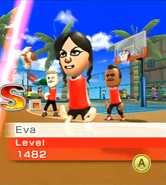 Eva and her teammates Tommy and Tyrone in Basketball. 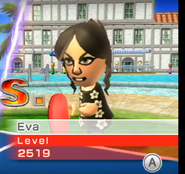 Eva about to play a Table Tennis match.

Eva with Greg and Silke in Wii Party.