If you're looking for the Mii from Wii Music with the same name, go to Donna (Wii Music).

Not to be confused with Don.

In Tennis, Boxing and Baseball, Donna is a high Pro at Grade ★7.

In Wii Party U, Donna is in Beginner Difficulty. 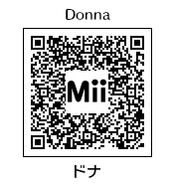 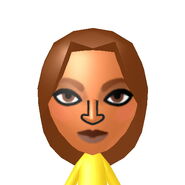 WhoAmI (LilGreenYoshi) against Donna and Giulia in Tennis.

Donna with Marius in Miitopia.

Donna with Anna and Xiaojian in Wii Party U.

Donna as a soccer trainer.

Donna as a swimming referee in Lap Happy.

Donna with Kazuhiko and Cheng-Han