Wii Sports Wiki
Register
Don't have an account?
Sign In
Advertisement
in: Wii Party U, Wii Party U modes, Wii U

Dojo Domination is a 1-player mode in Wii Party U.

This gamemode lasts a total of 20 minutes according to the game.

Reminiscent to the Wii Party Solo Mode, the player is in a dojo and will have to face several Miis from their Wii U in minigames in order to advance on. They have a total of 10 hearts that are taken away if they lose to even one of the Miis.

This gamemode begins with the first 3 opponents walking up to you as they throw at you the Minigame you must play against them in. 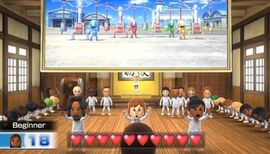 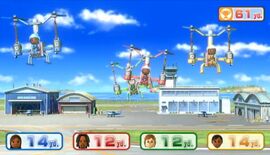 The player must win first place in the minigame in order to continue on to the next set of Miis. If you tie with one of the Miis though, they will block your attack, then you'll block theirs.

After they knock down the Miis they won against on a Minigame, a set of three Miis will walk up to the player and play against them in another minigame.

This will continue until you reach the final opponents and beat them. 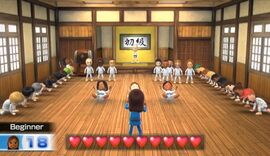 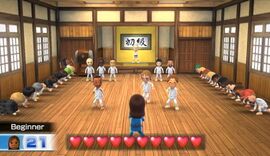 If they even place under one of the Miis, the Miis that placed over them in the Minigame will attack them, causing them to lose a heart. Afterwards, the Miis that you defeated go to the sides of the dojo while the one you failed to defeat stays and goes against you again, this time with some other Miis alongside them. 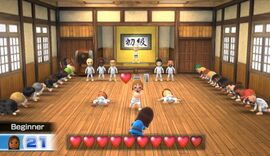 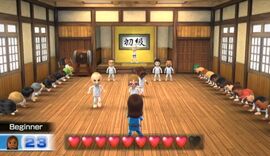 Once you defeated all of them, it's time to go face the boss of that dojo, who will take away 3 hearts from you if you lose against them. They appear in a different type of clothing from the other 29 Miis, and are set at higher difficulty than the others too. 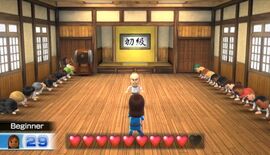 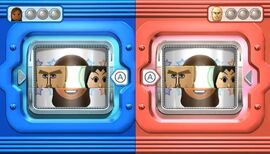 Once you win against the boss of the dojo, you have officially won. Then your Mii will pose and smile and wink at the screen. 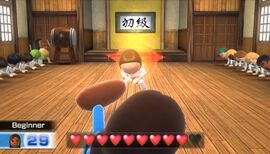 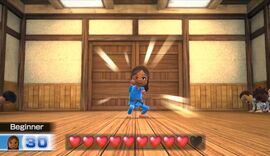 White outfit with White belt: CPUs on beginner difficulty. Only found in beginner, but a "drummer" wearing a variant of this outfit appears in the dojo on all modes. He/she plays their drum after a minigame is chosen.

White outfit with Black belt: CPUs on standard difficulty. 1 can be found in beginner mode, and if you lose to them, you lose 3 hearts.

Red outfit with Black belt: CPUs on advanced difficulty. 1 can be found in standard mode, and if you lose to them, you also lose 3 hearts.

Black outfit with Black belt: A CPU on expert difficulty. Only 1 is seen, and they're seen on advanced difficulty.

Hayley wearing the Expert outfit, only seen during Advanced difficulty.