His level in Swordplay is decent at level 431 to 435. He wears Bulky Black Armor as the Boss of Stage 1 in Swordplay Showdown. He shares a moveset of a gold armored enemy in the normal stages (with the exception of Silke) and is defensive and rarely attacks.

He is the Beginner of Table Tennis, with a skill level of 11 to 15.

He is terrible at Basketball, being the 7th worst player with a skill level of 101 to 105. His teammates are Nick and Kentaro.

He is fairly average at Cycling, coming in 62nd out of 98.

In Wii Party, Cole is in Advanced Difficulty. 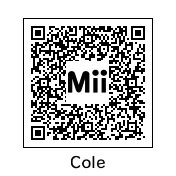 Cole's QR Code, as seen in the portrait. 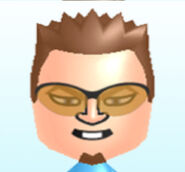 Cole as the boss of Stage 1 in Swordplay Showdown. 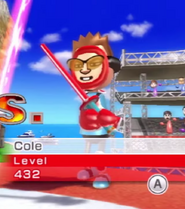 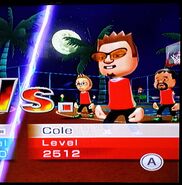 Cole and his teammates Kentaro and Nick in Basketball. 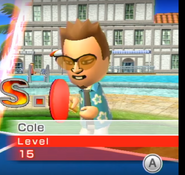 Cole as the first opponent in Table Tennis. 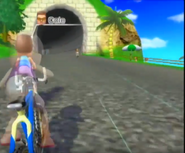 Cole and Fritz in Shifty Gifts.

Guest B, Cole, Misaki and Fritz in Chin-Up Champ.

Cole in artwork for Wii Party.
Community content is available under CC-BY-SA unless otherwise noted.
Advertisement