If you're looking for the Mii from the Wii with the same name, go to Chris (Wii).

In Tennis, Chris can be a teammate and will therefore only be Grade 1.

He only competes in Baseball as a teammate.

He doesn't compete in Boxing, though he can appear as a coach.

In Wii Party U, Chris is in Beginner Difficulty. 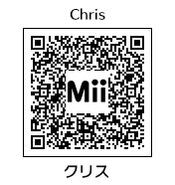 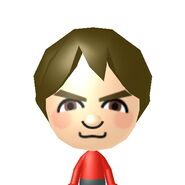 Chris in the 3DS's Mii Maker.

Chris in a Mario Kart 8 trailer. 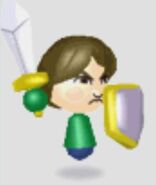 StreetPass artwork of Chris in green.

Chris is a minigame demonstrator

Chris with an alternative hairstyle from a SSB4 trailer.

Chris in a Mario Kart 8 screenshot.